Can the dog eat tomatoes?

Your dog can have tomato into his diet, but you have to be careful about certain parts of it and that there are no diseases in him: here is how to behave. 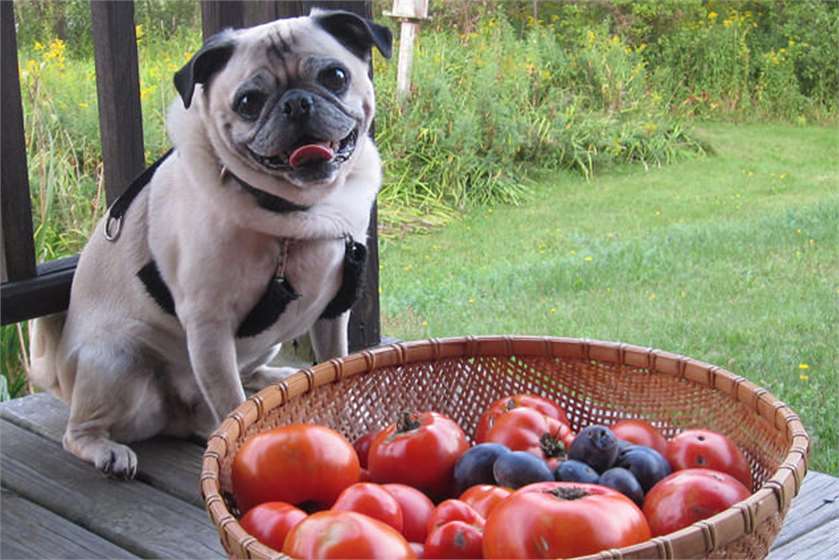 Can you give your dog tomatoes?

Dogs are very voracious by nature and tend to eat anything that seems edible before their eyes. In particular, they are attracted to everything their owner eats, whether it is a ball of meat or a head of lettuce.

Thus, the owner of a dog constantly wonders if he should give in to his dog, who continues to stare at him when he eats, by giving him food on his plate. In summer, raise your hand if you don’t often have tomatoes on the table, which in salads is a nutrient-rich dish, fresh and quick. Can the dog eat tomatoes? Read on to find out.

While we eat, although it is better for the dog to eat foods specially designed for him, we can share some foods with him to please him. Although it is always better to please your dog with petting or new games rather than giving him more food, with the risk of making him fat. Tomatoes are part of the food the dog can eat, as long as the owners understand the risks.

Tomato: what not to give to the dog

Tomatoes belong to the plant family of belladonna, which means that plants contain components that are harmful to certain animals, including solanine. This one is also present in other nightshades, like tomatoes, like eggplant, peppers, potatoes and peppers, so in more foods than we imagine and that we often eat together as in the ratatouille.

Fortunately for dogs that love tomatoes from time to time, solanine is a substance found only in the stem and leaves of tomatoes and related plants and unripe tomatoes. It is harmful to dogs, especially if they are still puppies, only if it is consumed in large quantities. After all, even when you feed your dog peach, you need to be careful with the leaves and other parts of the fruit. So a very simple advice to follow to avoid an accumulation of solanine in the body of your dog is to give him small quantities of tomatoes, from time to time and not to combine them with other solanaceae.

Avoiding indigestion of this substance is problematic for those of us who have a tomato plant in the garden, because we have to be careful that our dogs do not eat green tomatoes or chew the stem and leaves, especially since we cannot control how many tomatoes have been ingested. I recommend that you create an artificial barrier around the tomato plants to keep the dog away from the tomato plants. Otherwise watch them carefully in the garden. Your dog and your tomatoes will appreciate it.

If your dog has eaten the green parts of a tomato plant, watch it carefully to see if it shows signs of poisoning. The consequences of ingesting too much solanine are:

In this case I suggest you call your veterinarian. Another harmful substance in the leaves and stems of tomatoes is tomatine. If your dog has a dangerous excess of tomatine in his body, he could probably present, in addition to the signs listed above for solanine, loss of coordination, muscle weakness, tremors, convulsions and, in borderline cases , even heart problems.

The good news is that these symptoms are rare and that the prognosis for dogs poisoned with tomatine is generally good. Call your veterinarian if your dog has these signs, as they can be a symptom of other serious health problems in addition to eating tomatoes.

Ripe tomatoes: Yes, but not to all dogs

They contain antioxidant substances, that is to say substances which are used to maintain the health of your dog and to fight cellular aging. They are rich in lycopene which seems to have anticancer properties, especially for the esophagus and the lungs. Lycopene, when used with Vitamin C and Vitamin E, also maintains your dog’s vision health.

Tomatoes, even ripe, are not recommended if the dog has stomach problems, as they are known to increase acidity and gastroesophageal reflux. Those of us who have these problems already know this. In addition, tomatoes, like almost all foods, can cause intolerance and allergic reactions in some dogs, manifested by swelling of the tongue, burning in the mouth, difficult breathing, itching, and symptoms. similar to those of the cold. So, at first, give your dog very small amounts of ripe tomatoes to see what his reaction is.

The dog can eat the tomato even cooked but you must remember never to give him tomato sauce if you add garlic or onion, both very dangerous for the dog, because they act negatively on its globules red, causing long-term illness like hemolytic anemia. One problem with this form of dog anemia is that there is no safe treatment, so this disease forces the dog to undergo transfusions and undergo antibiotic therapy, as his immune system is weakened and is more prone to bacterial infections.

When we live with a dog or any other pet, we have to know that there are a number of foods that should not be eaten, since otherwise your health could be in danger. But we must also know that there are some myths that are just that, myths, that do not correspond well with reality.

So if you’re wondering why dogs can’t eat tomato, the answer is that they can . There is simply no abuse.

Tomato is not bad for dogs. If one day we have leftover macaroni or spaghetti, for example, we can give it to them without problem, even if it has salt. For one day a week nothing will happen to him. Now, what we should never do is give him tomatoes every day, much less give them green . Also, we do not have to feed the leaves or the stem.
In the event that we have a garden or that we are growing tomatoes in pots, we have to watch our friend so that he does not eat them , mostly as a precaution. Anyway, I insist, to make you feel bad you would have to eat huge amounts of leaves and tomatoes, and nobody would think of giving your dog, for example, a kilo of tomato, and less every day.

Regarding tomato ketchup for humans and ketchup , when carrying salt and sugar, you should be more alert . But for that we can simply make a sauce with natural tomatoes and not add salt or sugar.

In case of overeating, the dog may have diarrhea, tiredness, gut pain and muscle weakness . For him to improve, we will have to take him to the vet urgently.

So, we can give you ripe tomatoes (better if they are natural) from time to time, but never green.

In summary, it is therefore preferable that the dog avoids the parts of the plant and unripe tomatoes because of the presence of solanine and tomatine, although they present a risk only if they are taken in excessive quantity. The dog can eat ripe tomatoes, even cooked and in sauce, except if he suffers from stomach problems and if in the sauce you put onion with garlic. In any case, give your dog a small amount of tomato at the start to make sure he is not allergic.

You may also be interested: Are Vegetables Good For Your Dog?