Giardia in Dogs – Get Expert Insights on Symptoms, Diagnosis, Treatment

Giardia is a small single-celled organism that lives in the gut of humans and most domestic animals. There are different subtypes of giardia and some are host specific, ie. infects only 1 animal species, while other subtypes of Giardia can infect several different animal species. Some of the Giardia types can infect both humans and animals, e.g. dogs and cats, thus forming what you call a zoonosis.

What are the symptoms of giardia?

In dogs infected with Giardia, mild to severe diarrhea is seen, worst in young puppies. The stools are typically smelly and light in color that may appear fresh blood.

You can see weight loss, but rarely decreased appetite. Giardia infections do not in themselves cause fever and vomiting.

From a dog infected until clinical symptoms are seen, it takes between 5 and 12 days, the average is approx. 8 days. Not all infected dogs get symptoms, they are called asymptomatic carriers, and they can pass the infection on to other dogs without even being sick. 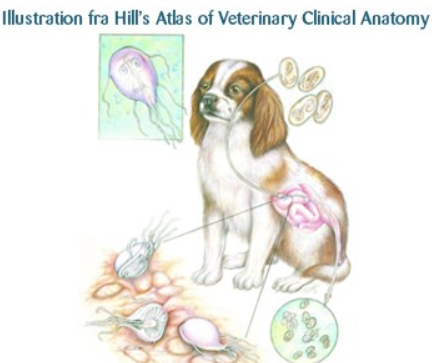 How can your vet diagnose giardia?

The diagnosis is made by examining the stool for Giardia cysts. This can be done with a simple test at the vet or the sample can be submitted to a laboratory.

How is giardia treated?

Giardia infections can be treated medically, but at the same time require thorough cleaning and disinfection in the environment to avoid reinfections.

There are no drugs registered for the treatment of Giardia in animals, nor are any drugs proven to be 100% effective.

Most often Fenbendazole is used once daily for 5 days and the cure is repeated after 14 days.
Metronidazole may also be used, but has been shown to be less effective than Fenbendazole in the treatment of Giardia in dogs, and metronidazole may cause some side effects in the form of decreased appetite, vomiting and altered behavior. 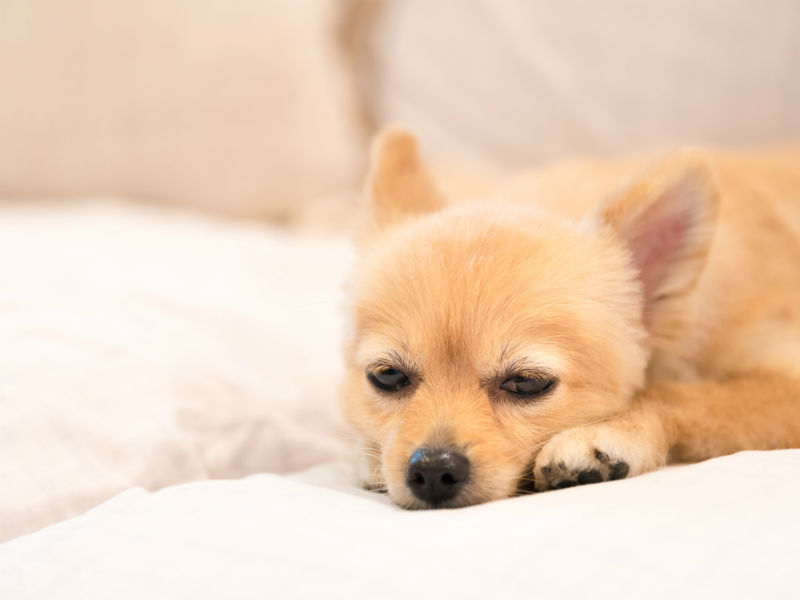 The process should proceed as follows

What is the future of your dog if it has giardia?
The prognosis for the dog with the right treatment is good, but it requires that the risk of reinfection in the environment is removed. Since there are no drugs that have been found to be 100% effective, there is a risk that the treatment will only beat the infection and that the dog may have symptoms again if the immune system falls for another reason.

Why do dogs get giardia?

What is the risk of your dog getting giardia?
In dogs in Denmark, Giardia infections with clinical symptoms are relatively rare, and most often only in kennels and other places where there are many dogs gathered in a little space, as well as in very young puppies and dogs with reduced immune system.

Why are Giardia so difficult to get rid of?

There are actually good medications for Giardia that kill the parasites. Nevertheless, many pet owners are unpleasantly surprised because a few days after treatment, giardia can be detected in the feces of their four-legged friend again. How can that be?

Can giardia infect humans?
Giardia is a potential zoonosis, ie. that certain of the giardia subtypes can infect dogs and humans, however, not all of them. Unfortunately, we cannot distinguish between the different subtypes and therefore one should be aware that there is a potential risk of human infection. Therefore, you should maintain an extra good hygiene when handling infected animals and areas, and contact your doctor if you have an animal with giardia and even get diarrhea symptoms.

No medication is 100% effective and so is the cure for Giardia. It is therefore important to provide the gut system and the animal’s own immune system with the best conditions to help fight the parasite.
We recommend giving so-called probiotics and lactic acid bacteria. It’s called either ZooLac or Canikur. It is also important to provide extra fiber in the diet. Optionally mixed with sparing food.
Dogs (and less frequently cats) who have a “delicate stomach” and who have previously had thin stomachs and extra intestinal gas when given certain treats and chewing bones may benefit from getting the same diet as the multi allergy. In that case, they should have Hills Z / D (or equivalent) for 3-4 weeks without getting treats or leftover other “candy” next door.

The parasite can be infected from carpets, bowls and baskets – even after several months. It can still infect after the treatment is done and in this way a dog or cat can infect itself again after you have finished giving medication.
Thorough cleaning of all your pet’s stuff is crucial to whether we can get the parasite eradicated.
Since some types of Giardia can infect us humans, you should avoid using the same brushes and rags that you otherwise use and do not put bowls in the dishwasher.
We recommend using Viacon S, Rodalon or Chlorine for cleaning. Boiling water can also be effective for bowls and brushes. Liquor is not sufficiently effective against the parasite.
It is also a good idea to wash the dog or cat, as there may be parasites in the coat. You can, for example. do in connection with each treatment.
Wear gloves and wash your hands thoroughly also under the nails.

The most important hygiene measures against Giardia at a glance

Useful measures to prevent transmission to other animals and to prevent reinfection are:

Some animals will continue to have Giardia in the intestinal system even though they have become healthy. So they have normal stools and are healthy, but if they get a thin stomach from another disease (eg menopause or colds) they can flare up again.
If the symptoms are mild we do not necessarily do anything extra, but sometimes it may be necessary to test for Giardia again even after many years.

Is there anything else I can do to prevent my pet from having giardia problems again?

We are often asked this question, but it is difficult to answer. What is certain is that giardia often causes no problems such as diarrhea in healthy animals. This is precisely why giardia are so widespread in the environment: Many four-legged friends with giardia on board run through the area without anyone knowing because they are not sick.

Unfortunately, to our knowledge, there is no scientific investigation that could “measure” whether strengthening the immune system and measures to promote intestinal health cause an animal to get rid of or tolerate the pathogen itself in the future. However, we often recommend our patient owners to take special care of their animal’s gut health, especially after antibiotic treatment. It is well known that a stable healthy intestinal flora (microbiome) makes it more difficult for pathogens to nest in the intestine.

For example, it makes sense to give a probiotic after antibiotic treatment. Also prebiotics (which the beneficial intestinal bacteria food supply) are recommended, preferably in combination with a probiotic. In our own experience, feeding colostrum can also help promote intestinal health and resistance. It also has probiotic properties and helps to strengthen the intestinal barrier.

You may also be interested: Peritonitis In Dogs: Causes, Symptoms And Treatment